EXCERPT FROM: MY FATHER WAS A GOLD MINER

In early 1960 my father was recruited by the owners of Coalbrook coal mine, close to Vereeniging, to head up an emergency team of shaft sinkers to sink a shaft to open the way to rescue 439 miners who had been trapped some 300 meters underground. A borehole had already been sunk immediately above where the miners were thought to be trapped, so the mine engineers suggested that a 3 meter shaft be sunk closer to the Vaal River, to deal with the water problem that was discovered by the borehole operation.
He had barely started on his last shaft sinking assignment when the true ramifications of the catastrophe, the biggest in South African mining history, became clear and a living nightmare that disturbed him for years to come. This disaster played itself out over a number of days, with the ensuing rescue effort running into weeks.
The catastrophe unfolded on the morning shift in late December 1959, a number of black miners had bad omens from rumblings coming from rock formations overhanging the underground working in a section of the mine that was not being mined. When the underground rat population started fleeing for any opening to fresh air to the surface the miners fled likewise, all headed for shafts or shaft stations for hoisting to the surface. In fact a portion of the mine's hanging wall did collapse, but no workers were injured by that. Instead, the sheer force of wind caused by the collapse had many blown over and injured. Normally men (white and black) went underground day by day blissfully repressing any thought of accidents and not returning to see the daylight again. But when seismic events took place all became aware of imminent disaster facing them around the next corner. All too vividly men become aware that they are living by grace of hundreds of meters of rock roofing above, in the case of Coalbrook, or thousands of meters of rock hanging over them in the deeper gold mines.

The immediate reaction of the "front line" management, to the miners being spooked by the ominous rumblings of rock formations hanging over them, was to block and stop them running away for exits. White Shift Bosses instructed Boss Boys to stand in the way of the fleeing miners and chase them back to the workings. Messages of a strike in progress underground among the white and black workers were conveyed to the mine managers sitting comfortably in their surface offices. They sent down teams of white supervisors who threatened the workers with criminal charges for breaking their contracts or instant dismissal. Alternatively, if they did not return to their work places, the police would be called. And so the panic was halted and all went back to work. A few days passed by without incident. Then the catastrophe crept like a silent monster on the nearly 1,000 unsuspecting miners as entire sections of the mine bore the brunt of collapsed overhang rock. This blocked any hope of escape for 439 miners, the vast majority black but a good number of white miners as well. Trapped in the belly of the earth, at coal faces and in travelling ways, they remain buried to this very day. After more than a week of anguished operations to sink makeshift shafts and boreholes to ascertain where to focus rescue efforts and conditions in the collapsed underground workings, all further rescue efforts were given up.  The fatality was 439 black, five white miners, and 40 mules. It appears all fled to the safety of an insular-shaped redoubt in the south end of the mine’s section 10 underground workings.

After this traumatic experience my father then returned to the mature mines with a series of jobs all in the Klerksdorp area: Stilfontein, Vaal Reefs, and lastly Hartebeesfontein, before final retirement in 1975. But the experience at Coalbrook haunted him for time to come and was added to the top of his list of narratives told ad infinitum to his sons, grandchildren and whoever would listen.


How and why the Disaster enveloped

At about 19:00 on 28 December 1959, the Northern part of section 10, including the area where the experiment had been done, collapsed. The accompanying wind blast injured one person some distance away. There were no other casualties, as the top coaling, which was still being done by Section 10, was done on day shift only. It covered an area of approximately 6 ha and had been arrested towards the south by one of the 12.2 m wide barriers. Top coaling was in progress approximately 300 m south of where the collapse occurred. No roof noises, scaling or any other indication of instability was observed during the day shift.

For the next three days, roof noises and pillar scaling were observed around the perimeter of the fall, but then it died down. Top coaling and other mining operations continued. Two weeks later an Inspector of Mines made a routine visit to the mine and carried out an underground inspection at sections in the vicinity. The collapse was not reported to the inspector, and there is no record of anything abnormal being observed during the inspection. On 21 January, 24 days after the first collapse, the major event took place. At about 16:00, the miner in charge of a section, which was then working just west of Section 10, was alarmed by loud shot-like noises coming from the direction of Section 10 and pillar spalling. He withdrew his gang to a safe place and on the way out they were overtaken by a wind blast. He reported the incident to the shift boss, who proceeded in-bye to investigate.

At 16:20, the miner in charge of a gang working just south of Section 10 also became aware of problems in Section 10 by a strong wind blast from that direction and sounds like heavy thunder. He also withdrew his gang. The mine overseer and acting manager (the mine manager was on annual leave at the time) proceeded underground to investigate. They found that some of the ventilation stoppings around No. 10 Section had been blown out and methane was emanating. No carbon monoxide was detected, ruling out the possibility of an explosion. Cracking noises were still coming from No. 10 Section, but from nowhere else. Word was received from surface that a depression with wide cracks had formed over Section 10. The mine overseer and acting manager concluded that as surface had subsided, the ‘weight had come off’, and as the problems were confined to Section 10, the remaining areas were safe. They nonetheless withdrew the two sections in the immediate vicinity of Section 10 and made arrangements for the damaged ventilation stoppings to be replaced. The sections to the east apparently continued working normally, as the haulages continued to operate and no word of problems had been received from those sections. Some time after 19:00, the men replacing the ventilation stoppings south of Section 10 became aware of increasing thunder-like noises from Section 10 and increasing methane emissions. They withdrew but before they could reach a safe place, were ‘overtaken by a hurricane of dust laden air accompanied by crashing like thunder’. The gale swept through the mine for ten minutes with great force and then at diminished force for a further 45 minutes. Men were blown over, and a general exodus from the mine ensued. It was not realized until much later that not a single one of the 438 persons from the four sections working in the east had come out of the mine. The general manager and mine overseer proceeded underground to investigate. All the entries to the east had collapsed completely. They found one person from Section 4 who had been working in the haulage and brought him to safety. He was the only survivor from the east. The rescue operation was covered extensively in daily newspapers and on the radio. Attempts were made to drill rescue holes from the surface, but the strong dolerite sill hampered the operations. After some weeks, the rescue attempts were abandoned. All the boreholes indicated a general scene of collapse, several flooded with water and high concentrations of methane gas. The bodies of the 437 men who died in the collapse were never recovered. Seismic and surface observations The following seismic events were recorded that can be connected to the collapses:

➤ January at 19:26, Richter magnitude 1.0. Due to the very wide spacings of seismographs it was not possible to locate these events accurately, but they were roughly located in the general area of the mine.

The events on 28 December and at 16:45 on 21 January exhibited single amplitude peaks while the one at 19:26 on 21 January lasted for 5 minutes, with three distinguishable amplitude peaks during that period. Comparison of the times at which the seismic events were recorded to the times at which wind blasts and other observations indicating collapse underground were made, leads to the conclusion that the seismic events were caused by the collapse and were not minor earthquakes leading to the collapse. No surface cracks were observed on an inspection by the general manager on 29 December, although a cattle herder did report cracks to the local farmer on 9 January. On 21 January, the first surface cracks were observed on the road traversing the mine at 16:20. By 18:30, the cracks had progressed some 1200 m to the south-east. Above the area of the experiment, a circular depression of about 1.8 to 2.1 m deep and diameter of 150 m had formed, bounded by cracks approximately 0.5 m wide. The total area of collapse as indicated by the extent of surface cracks, was approximately 324 ha. Over most of the area, the amount of subsidence was approximately 0.6 m, but more in areas where top coaling had been done. The general conclusion to be reached was that the collapse on 28 December occurred above the experimental area and on 21 January it spread outwards from that area, only stopping where it reached solid ground or pillars that were wider than 12.2 m. The notable exception was in the north-west, where an area that was both mined on the 12.2 m wide pillars and top coaled, bordering on the collapsed area, did not collapse—there the mined span was restricted to approximately 275 to 300 m. 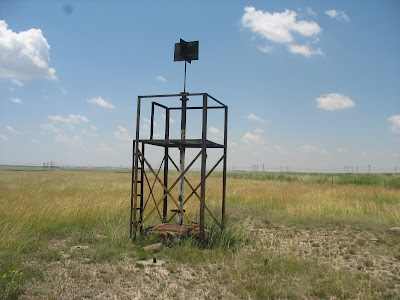 Cover over the borehole drilled immediately above the trapped miners. The drill bit broke
and this attempt abandoned 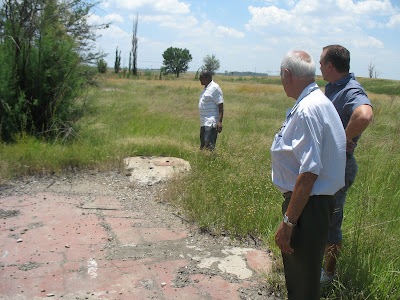 Looking at the concrete which seals the ill-fated Coalbrook North Shaft.
From left to right: Lenning Makiwane  (Zamdela coordinator of Khulumani),
ommy McClean, and Gregotry MaClean. 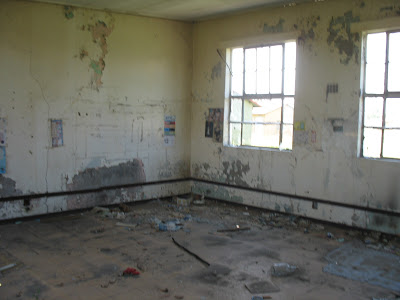 A 10x10 meter room for which provided 20 bunks. Most rooms have an eerie feel to them as articles belonging to the victims of the disaster 53 can still be found in the rooms. 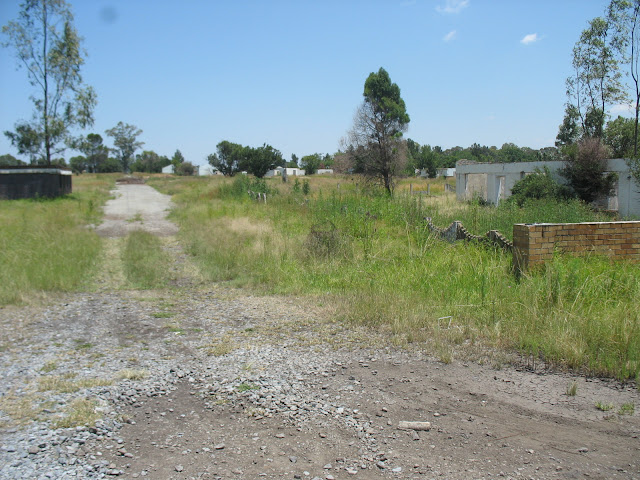 Derelict houses located close to the ill-fated Coalbrook North Shaft.
The accommodation was for white miners. 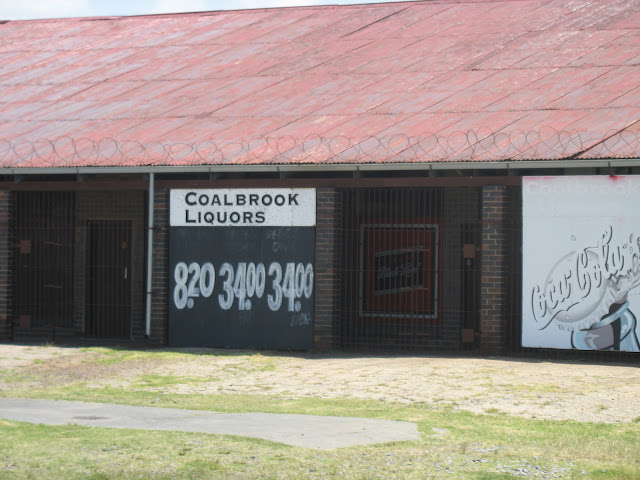 What used to be the mine-owned trading store was turned into a bottle store some years after the catastrophe of 1960. However Zamdela residents complained that its situation being co close to the catastrophe and empty residences of the victims was a cultural abomination
and subsequently closed down.

1 SAIMM Update 2006:  A mine engineer speaks out. Asks what has changed in rock mechanics since Coalbrook disaster.