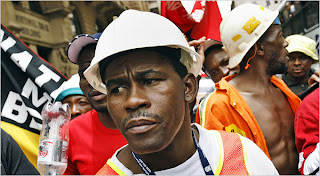 Notes from a symposium on Mining, Wits Institute for Social and Economic Research, 3rd 4th February 2011

In introductory remarks it was noted that recently mining issues had become marginal in public and media debate and reason for The Wits Institute for Social and Economic Research (WISER) to hold a Symposium on recent to outline not only the continued centrality of mining in the South African economy, but deal with salient features in the transformation process. In his address Dunbar Moodie, a leading expert on mining, pointed out the changing role of violence beginning with that of “putting in the boot” by low level management, the total control of mine compounds as management tools, and what he called an evolving “maximum average system” fixing low wages as norm coinciding with job reservation.


Since the tabling of Wiehahn Commission reports in the apartheid parliament in the late seventies, which at least recognised the trade unions in the aftermath of the 1972 strikes and the Soweto Uprising of 1976, there have been marked changes. The withdrawal of Malawian migrant labour and the independence of Mozambique combined to erode the stringent control over workers lives as the mines had to depend on a growing proportion of their labour from South African sources. Black mine workers were allowed to commute to their places of work and live in peri urban areas.

With the increasing strength of the National Union of Mineworkers, violence as a controlling tool of management gave way to negotiation. This was a not an even process. The great mine workers strike of 1987 was accompanied by considerable violence and did not achieve much in the way of wage demands. But NUM was able to establish a pension fund capitalized by R 20 billion. Workers gained control over the compounds. The 1987 strike was watershed. Violence as a management tool dwindled and disappeared.

Black Economic Empowerment was comprehensively addressed with in a paper read by Don Lindsay. According to him Black Economic Empowerment to a large extent was prefigured by immediate political realities of elite enrichment, than by creative statecraft to address job creation and solving poverty on any massive scale. With political power came the means to add economic power in the sense of Smuts Ngonyama’s proclaiming that “we did not struggle to remain poor”. Black Economic Empowerment became black economic elite empowerment. To date R97 billion has been spent on buying Black Empowerment shares in corporations, much of it interest-bearing borrowings, with very little, if any impact on GNP growth or job creation. Lindsay spoke of the “structural independence” of the BEE project in general. This raised heated debate as it implies that this “structural” has become a self sustaining juggernaut difficult to dismantle. He also referred to the huge amount of money with little or no social or economic benefit to the people. Finally BEE ruffles State-Business relations.

Illegal mining can be perceived as being the soft, informal edge of BEE. It was shocking to realise the full extent of this at the symposium. Andries Bezuidenhoud read a paper and in the discussions that followed in which a mine manager at Harmony Gold Mines also testified, it may well be that in mines where the “zama zamas” are doing illegal mining may amount to one half of the underground labour force. There is also a growing tendency for the illegal miners to make use of fire arms and set booby traps. They are well organized and are said to earn anything up to R 5,000 per month. Given the nature of the operations, the technologies involved and the market dynamics, it is more than likely that this is a heavily syndicated business. One countermeasure is to prohibit formally employed workers from taking food underground.

Entire local peri rural economies collapse when there are accidents and illegal income drops or stops in the affected community. When one considers that these “Robin Hoods” will buy a loaf of bread for R 100 or a bottle brandy for R 1,000 underground, one can realise what this food prohibit amounts to. The Harmony manager mentioned that a whole loaf of bread can be squeezed into a shoe and compacted to the thickness of a pancake.

The issue of women workers employed underground was presented in a researched paper. Government has set a figure of 20 % women on the labour force. Short term there have to be 10%, although from the NUM report it appears only 3% has so far been achieved. These women have to commute and are not able to be accommodated in existing compounds. Some commute as far as 100 kms per day to and from work. When one hears of the practical problems the women working underground have to contend with one wonders what desperation drives young women to engage themselves in this way. Sexual harassment is rife and especially in cages while being lowered and surfaced in cramped spaces. The culture shock of working in a very heavy male dominated environment is a challenge that has to be overcome. Women have to do sexual favours to receive help and training underground to do jobs like winch drivers. With the introduction of women there is a culture shift in dress, both for men and women, the establishment of adequate toilet facilities and also for men who were inclined in the past to work half naked and relieve themselves in worked out areas.

Acid Mine Drainage: the nature, scope of acid mine water drainage is as inconceivable to many as climate change. There seems to be an attitude with many that the decanting of acid mine water in lower Johannesburg, amongst other places, is a future generation debt. There are no easy solutions. Pumping would have to deal with huge quantities of water given the size of areas where water is filling up to eventually decant through disused mines on the surface. Detoxification is more difficult than treating with lime to bring down the acid content. Some areas also are decanting spawning radio active decants.

There were a number of other topics dealt with. Overall the Symposium was extensive with the more interesting information coming to the fore with questioning and deepening out the issues.

Berend Schuitema
Posted by Unknown at 11:42 PM No comments: