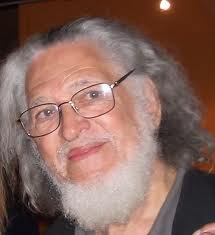 A veteran of the struggle in the truest sense of the word, a fighter until his last breathe, the passing of Comrade Dennis was sad but also a seminal milestone in the history of social movements in South Africa. Dennis made a difference with his life from the earliest days of struggle against Apartheid, and left an impression which for sure will be cherished for many generations to come.

Relatively little is known about him in the constellation of the big stars of the struggle due to his humility and his reflective manner of speaking truth to power, to those placed in power for decades of struggle to achieve finally the new, democratic society of South Africa in 1994. In ideological formations set in rock, he spoke his mind whether to those seeking power, or Apartheid monsters abusing power. Once, when he openly criticised Thabo Mbeki's government for rejecting calls out of hand to not repay the Apartheid Debt, Essop Pahad responded in a most disparaging manner publicly calling Dennis a "drop out from the struggle". These unkind and unwarranted words spoke the headlines of the Sowetan daily newspaper and did more convey the Jubilee message than what Pahad had in mind. In fact he apologized to Dennis out of his own accord. Hit a hero, you hit rock bottom!

In his last years Dennis fought for the many thousands of men and women who gave their lives and liberty for a better future, but who were scandalously left out in the Truth and Reconciliation Commission (TRC) process aimed at restoration and reparations. Indeed, Comrade Dennis is counted among 20 victims of Apartheid in a test case lawsuit seeking justice and reparations under the Alien Tort Act in the New York District Court. The judicial process is ongoing and the victims ion the test case are suing the big corporations on behalf of many thousands more, reparations in view of corporate collaboration with Apartheid.

Dennis was born in Port Elizabeth on the 28th of November, 1924. His parents settled in the then Rhodesia but returned to the home town Port Elizabeth when Dennis was four years old. He was a brilliant pupil at school and went on to the Universities of Fort Hare and the Witwatersrand. From early on in life he experienced the stain of Apartheid on his skin being classified as a Coloured. He fought against the marginalization of his people and by the late 1950's, when it was high tide for the mainstream liberation movement with the Defiance Campaigns, he was a banned person for long periods of his most productive years of his life, and finally imprisoned on Robin Island in 1960. His faith in a humanity that heals itself speaks in his poetry, and he saw the reality that sports in a spirit of freedom and justice is the catalyst in building people and societies.

While imprisoned in Robben Island and taken to the city for medical attention, he escaped from police custody and was shot in the back while attempting to flee on a bus in Cape Town. Shortly thereafter he was in exile in London, and later still in the US, where he played a forefront role in the sports boycotts against Apartheid.

I met Dennis for the first time in the canteen of the Eskom Conference Centre in Johannesburg, while attending the founding meeting of the Jubilee Anti Debt Movement, aimed at getting the Apartheid era debt declared odious and not repayable. That was way back in 1998 shortly after the ANC's scrapping of the Marshals Volunteer Corps inspired by Comrade Walter Sisulu. Dennis was a quiet person and humble person. He had a healthy phobia for imposed, top-down structures and a great believer that a love for justice and equity directs social movements from the bottom up. In his view, leaders are to be weather veins who should come and go and not cling to leadership pretending they are the rudders with ideological pilots in their heads.

I had an immediate liking for the man and we became good friends. As always, with Dennis the small things in life count and I enjoyed his witticisms that came from his customary spontaneous manner.One day I was driving him through East London when he asked me to drive on, but around the block and stop at the exact same place he redirected me from. Not knowing what was up with him, whether he saw something that needed attention, I fulfilled his request. I came to a stop in the middle of Argyle Street, in front of Procter House. I had to turn off the car as close to the kerb as I could while he went into a quiet meditation. After he came out of the mediation he told me, "that was very healing, thank you Berend". Why? Well, in his years on the run from the security police he was caught in East London, detained and interrogated in that very same Procter House where the Security Police in those days had their "chambers".

Our mission in town was to look up the CNA for a few journals, including The Economist. The man behind the counter, a white, gave it to him in a civil manner greeting him friendly with, "enjoy your day". With a wry  smile he turned to me as we walked out of the CNA and said, "you know, in the old days when I bought The Economist the salesperson invariably would ask, 'is this for your master?'" I immediately could picture a scene like that. "I asm glad to caught the irony of it", he said.

Dennis, the Poet and the Fighter for Justice,

Still with us and to me, in this precious poem he wrote: 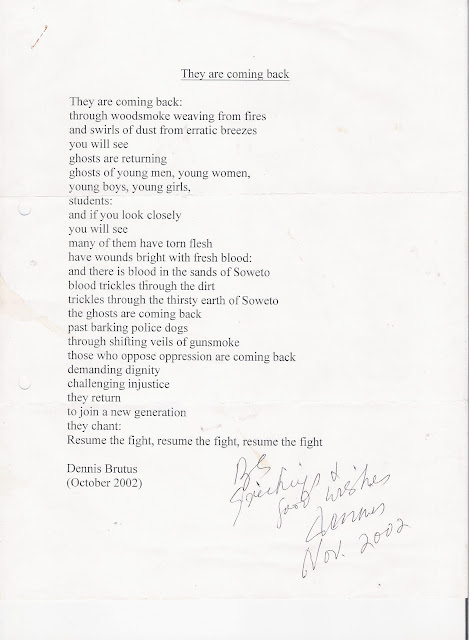 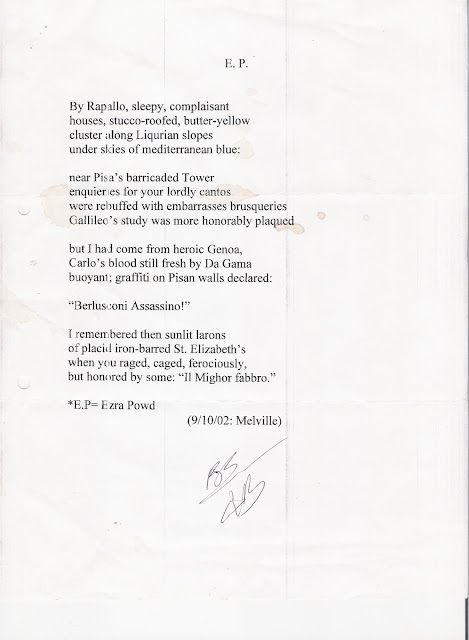 Posted by Unknown at 3:23 AM No comments:

By Robin Wright
Special to the Washington Post
Monday, August 2, 1976

JOHANNESBURG - South Africa’s racial violence in June revealed as much about white opposition as it did about black dissent: significant white anti-government militancy barely exists inside the country, despite the increasingly loud calls for change by white South Africans.

Only once did whited take advantage of the turmoil to express sympathy with the black rioters – when students from the University of Witwatersrand briefly paraded through downtown Johannesburg.

The reasons are related to a crackdown by efficient South African security police over the past year, according to a liberal white politician. Police have all but squashed the small but militant white anti-government factions through a series of arrests, detentions and trials of dissidents.

Only one militant white group has recently reemerged with any force – and only after changing tactics from a radical and “romantic” plot aimed at overthrowing the government to a more sophisticated campaign to discredit “establishment supporters” of the government.

That group is Okhela, believed to be the most clandestine white group operating within South Africa. Its most recent “coup” was an expose, entitled The Oil Conspiracy that documented how multinational companies based in South Africa allegedly broke sanctions by supplying oil to Rhodesia. It was published late last month by the United Church of Christ’s Centre for Social Action.

Supported by letters, internal memoranda and invoices, the report outlined a complex scheme allegedly operated mainly through the Mobil Oil branch in South Africa for 10 years, “whereby it has sold oil products to Rhodesia through an agreed chain of intermediary South African companies, most of which are in fact bogus”.

The report also claimed that Shell, Caltex, BP and Total oil companies set up similar procedures to get other oil products into Rhodesia. The embarrassing to South Africa was the charge that a government-owned corporation, Sasol, actively assisted in the manoeuvring.

The document itself is not as significant as the implications of its leak by Okhela, according to as South African political commentator. “Everyone knew that Rhodesia had to be getting its petrol supplies from South Africa – it was just a question of who was doing it and how”, the commentator said.

“What is more interesting ids that Okhela managed to penetrate that organization and purloin the highly secret documents. It took a good deal of investigation and legwork to put that together.”
The report also indicates that Okhela – formerly known as Atlas – has surfaced again after being threatened with oblivion and public ridicule just eight months ago.

The dissident white group appeared to be finished after the arrest last year of white Afrikaans poet and Okhela co-founder Breyten Breytenbach during a trip to South Africa from exile in Europe to recruit and organize white opposition.

During his subsequent trial on charges under the Terrorism Act and Suppression of Communism Act Breytenbach admitted that in Paris he had been involved in training South African exiles in espionage and sabotage with the goal of overthrowing the South African government. He said Okhela was the “white wing” of the banned African National Congress, a black South African movement head quartered in London.

But the overall impression left was that Okhela was made up of “romantic idealists who were unrealistic and ill-prepared to put their plans into action”, said a self-described socialist who knew the individuals charged. “Breytenbach made all white underground efforts look ridiculous”.

The near-fatal blow to the organization came at the end of the trial when Breytenbach pleaded guilty to 11 counts of terrorism and apologized to the government: “I am sorry for the ridiculous and stupid things I have done”.
He went as far as to apologise to Prime Minister John Vorster for an insulting poem he had written and thanked the police for their humane treatment. He was sentenced to nine years in jail.
The episode caused a severe backlash both among blacks and white liberals. Madikwe Manthatha of the South African Council of Churches said “this case will undoubtedly heighten disillusionment of blacks with whites.”

The security police provided further embarrassment by revealing that they had Breytenbach under surveillance throughout his trip, arresting him only minutes before his departure and thus netting several other persons he contacted. “The trial proved the police have a grip on the opposition,” a white reporter commented.

The government has since passed a stiff new Internal Security Act that allows for detention of any suspected person dissident for up to a year without recourse to legal council, bail or the courts.
Okhela thus appears to be the main avenue to white militancy here. Yet, extensive interviewing among anti-government whites did not turn up a single person who could claim knowledge of Okhela. Most, however, expressed surprise about the extensive work on the “Oil Conspiracy Report”

“If they are legitimate, it opens up a whole new field for ‘dissidence’” a liberal white editorial writer commented. “It’ll be hard to catch them and the damage could prove to be far more devastating to the government in the long run. But it’ll still be bloody hard to keep it from the cops”

Posted by Unknown at 1:19 AM No comments: